The big faceoff in the Qualifier between Stars and Sixers!

Melbourne Stars to win this game!

We are done with the league stage of the Big Bash 2019-20 season and we have our teams for the playoffs. In the Qualifier game, the Melbourne Stars would be playing against the Sydney Sixers in their home ground MCG.

The two sides have played well in the season to finish No. 1 and 2 on the points table. Only one point separated the two sides at the end of the league stage and this will make the upcoming game interesting. They had faced each other twice in the league stages where they won a game each.

Sydney Sixers are looking in excellent form to have won their last three games and this will give them confidence going into this game. As for the Stars, they have played well throughout the season but lost their last three games. The side will look to put that behind and take advantage of the home conditions and crowd support in the next game.

*Our match preview predictions are fully researched and provided in good faith but no profits are guaranteed. Please gamble responsibly, you should only ever gamble with money you can afford to lose.

The last three games have been in complete contrast to how Glenn Maxwell’s side played in the season. They went down against the Brisbane Heat in the last game by 71 runs. Maxwell would want his side to get back to form in this very important game as they will be up against one of the best sides of the season.

The Stars will need a good start from Seb Gotch and Marcus Stoinis. Stoinis who has made more than 600 runs this season needs to play well. They have a middle-order packed with in-form players and the likes of Nick Larkin, Peter Handcomb and Maxwell and they will look to build partnerships. In Nic Maddinson, Adam Zampa and Nathan Coulter-Nile they have good hitters down the order. 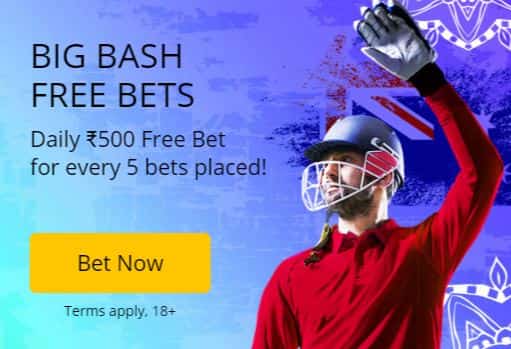 Sandeep Lamichhane’s unavailability in the next game is a huge blow to the side. They will thus need a strong show from Haris Rauf. Along with Adam Zampa, he has to pick early wickets with the new ball. Clint Hinchliffe, Maxwell and Nathan Coulter-Nile have also done well so far and they will be looking to check the flow of runs in the middle stages of the game.

Moises Henriques finds his side in just the kind of form he would have liked to see going into the playoffs. They won the last clash against the Melbourne Renegades convincingly by 7 wickets. Henriques would like his side to carry this form into the next game where they are up against the table-toppers.

The Sixers have their openers Josh Phillippe and James Vince in good form which is a big plus for the side going into this game. In Steven Smith, they have the perfect No. 3. Down the order Daniel Hughes, Jordan Silk and Henriques have played good knocks earlier in the season. Tom Curran’s presence down the order adds strength to the bowling line-up for the team.

Sean Abbott coming into the side makes the bowling attach very strong for the team. Ben Dwarshuis has picked wickets in earlier games and the side will need a good show from Josh Hazlewood and Nathan Lyon as they are the two most experienced bowlers for the side. They have leaked runs in the last few games and can’t afford to do this in this all-important encounter.

The weather would be slightly cloudy at Melbourne on January 31. There would be some assistance for the bowlers from the surface but overall we have seen a good wicket so far in the season at this venue. We should have another high scoring encounter at this venue in the next game.

Melbourne Cricket Ground offers lots of run-scoring opportunities to the batsmen who can easily score twos and threes in the large venue. The ball comes onto the bat nicely. Fast bowlers do get some assistance from the surface and the spinners also do well once the ball gets a bit older here.

In the past few games at this ground, the sides have preferred to bat first. The wicket has been a good one to bat on and a lot of runs have been scored. Going into this game the side winning the toss would likely bat first and aim at putting up a big score on the board.

The two teams have played contrasting cricket in the last few games. The Sydney Sixers look in great form at the moment having won their last three games and this will give then confidence for the next one. The Stars, on the other hand, have had a string of poor performances where they have lost their last three games. The Stars are playing at home and this will give them a slight edge going into this game.

Melbourne Stars to win this game!

MSK Prasad is the only person who could get replaced as Sarandeep Singh, Jatin Paranjpe and Devang Gandhi are set to continue in their roles for another year until their term ends in 2020. Here are fi... Read more

India is set to begin the World Cup on the 5th of June of against South Africa. Read CricBettingBuzz team preview for India and our cricket betting tips and predictions for India games in this year's... Read more

New Zealand had an amazing start of the Cricket World Cup on the 1st of June winning against Sri Lanka by 10 wickets. Read CricBettingBuzz team preview for New Zealand and our cricket betting tips and... Read more